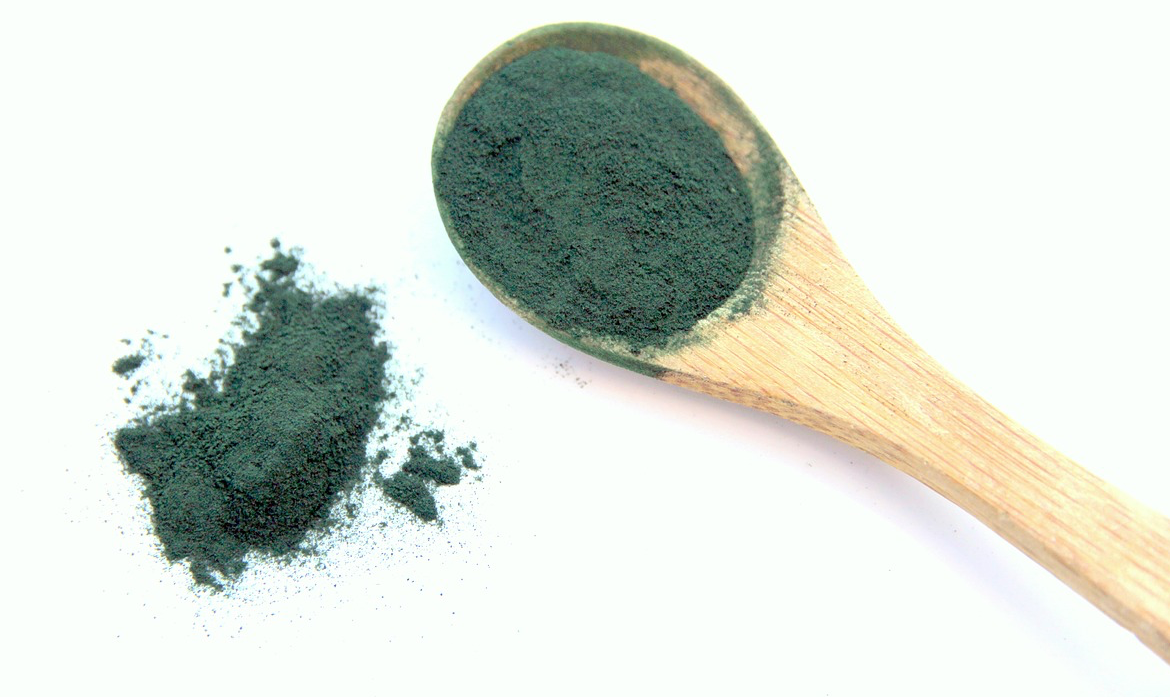 I was recently asked by one of my readers what is my opinion about spirulina and I decided that it’s a good subject to be detailed.

Most probably you heard about spirulina but what is the spirulina?

Let’s discover together more details about spirulina and health benefits for our bodies.

Spirulina is a greenish-bluish micro alga, one of the oldest forms of life on earth that have helped produce oxygen for millions of years so that other life forms can emerge.

Characterised as a “super aliment”, spirulina is so rich in nutrients that a water-based diet and this alga can support the smooth functioning of the body.

Once harvested, it is transformed into a thick paste, then it is left to harden, then crushed, and finally to be marketed in the form of capsules or powder.

I consume the spirulina as powder, mix it with other greens or just as it is and add water with lemon or some fresh pressed juice.

Even if some claim the unpleasant taste, spirulina encompasses 60-70% pure protein, that is, more than it can contain beef or chicken, which means that it has all eight essential amino acids (isoleucine, leucine, lysine, methionine, phenylalanine, threonine, tryptophan and valine) that can maintain an optimal state of health.

I recommend you my article ‘Best Vegetable Protein Sources’ to discover more about proteins.

Among the other valuable nutrients it contains are: gamma-linoleic acid, which reduces LDL cholesterol (low density lipoprotein) and prevents the development of cardiovascular disease, phycocyanin, a substance that inhibits the formation of colon cancer, five times higher beta-carotene than carrots and 40 times higher than spinach, arachidonic acid, vitamin B12, iron, chlorophyll and nucleic acid RNA and DNA.

At first, small doses are recommended because of the strong fish taste and because not everyone can tolerate the strong smell.

Spirulina has a high linoleic acid content that helps in the formation of prostaglandins, with a role in regulating blood pressure, preventing and improving various inflammatory processes;

chlorophyll has a regenerative effect; certain substances contained in algae, such as polio, diminish the harmful effects of radiation on cells, accelerate the growth of bone marrow cells and increase the immunity of the body, have an anti-cancer effect, antioxidant and delay the aging phenomenon.

At the same time, spirulina strengthens, increases resistance and stimulates the body’s defense system, slows the growth and multiplication of bacteria, has a bactericidal effect, detoxifies, accelerates the natural process of purification and elimination of toxins.

Spirulina lowers the serum level of total lipids and cholesterol, lowers blood glucose in diabetics and provides protection against the harmful effects of sunlight.

Through the intake of plant fibers, spirulina stimulates digestion, increases intestinal dynamics, contributes to the development of intestinal flora (Lactobacillus) and thereby to the regulation of digestion.

Even if it’s a supra aliment, there are some contraindications.

A good advice is not to exceed the recommended doses and start treatment gradually to avoid undesirable effects of sudden detoxification (gastrointestinal disorders, headache).

People who suffer from hyperthyroidism (resulting in excess of iodine in the body) should use algae tablets only at the recommendation of the physician and only under close supervision.

Do not administer spirulina to pregnant women and children under 3 years of age.

Because of the high protein content, people who suffer from phenylketonuria are not being administered.

Method of administration: 1-2 tablets (500 mg) are given daily or as directed by your doctor.

Spirulina has an excellent penetration effect on the skin, which has the effect of soothing, regenerating, refreshing, smoothing the wrinkles, reducing the dilated pores, eliminating the spots and irritations of the skin; periodic use brings youthfulness and freshness to the skin.

Spirulina creams are indicated for wind and cold skin – apply to areas exposed before going out.

The cream is not given in a very thick layer but must be allowed to progressively enter the skin so that the active principles of spirulina can exert its protective effect.

Also, spirulina creams are recommended for the prematurely aged skin.

Treatment is done 2-4 times a week after having a warm shower (it should not last long) to remove the dead cells so that spirulina can work.

The spirulina cream elasticizes the skin and speeds up regeneration processes at this level.

1. Rich in protein – besides the fact that spirulina contains between 50% and 70% of proteins, it contains all the essential amino acids;

3. An antidote against poisoning – according to some studies, spirulina is able to treat arsenic poisoning. Because of the large amount of chlorophyll, which can remove toxins from the blood, improving liver function;

4. Fights against allergies – millions of people have problems with allergies caused by dust, pollen, animal hair and much more. Spirulina consumption improves specific symptoms of allergic rhinitis such as sneezing, nasal congestion, and itching of the nose;

5. Regulates blood pressure – when regular consumption of spirulina is combined with a balanced diet and movement, the blood pressure level is improved in about 6 weeks;

6. Control cholesterol – use of 8 grams of spirulina per day helps to lower “bad cholesterol,” also being correlated with a lower risk of cardiovascular disease;

7. Stimulates immunity – due to continuous nutrients such as polysaccharides, spirulina is able to boost immune system activity. Likewise, phycocyanin, the blue antioxidant, increases the number of white cells in the body, which have an essential role in the immune system, producing antibodies that protect the body from bacteria;

9. Protects the brain – spirulina can protect the brain against degenerative diseases such as Alzheimer’s or Parkinson’s. Due to its neuroprotective effect, it can reduce inflammation and eliminate free radicals;

11. Anti-inflammatory properties – phycocyanin, the main active ingredient in spirulina, eliminates free radicals and prevents the production of inflammatory molecules. Also, phycocyanin is the one that gives the spirulina the unique green-blue color;

12. Effective against anemia – Spirulina supplements help produce red blood cells, their deficiency being the primary cause of anemia;

13. Beneficial loss – due to high protein content, spirulina consumption inhibits hunger. It is also rich in fiber that helps the digestive system to function normally;

14. Maintains skin health – due to the nutrients and amino acids in the composition, spirulina gives the skin a shiny and healthy appearance. Spirulina inhibits free radicals, which are responsible for skin damage;

15. Maintains bone health – Because of the high calcium content, spirulina is beneficial to bone health.

There are many benefits introducing spirulina in your diet:

– the most concentrated source of vitamin B12

– the most concentrated natural form of nutrients

– protects the body against invasion of germs

– grows the microbial flora, so beneficial to protect our body

– symptoms of anemia, poisoning can be removed with it

– can prevent cancer and viral infections

– a good help in removing stress and depression

2 thoughts on “Spirulina And Health Benefits”